You know the drill, you watch enough post-apocalyptic movies and suddenly you are seeing signs of the apocalypse everywhere. Next thing you know, you are planning alternate escape routes, building bomb shelters and hoarding like a mother effer. At least, that's how it works with them. Another side effect of my rampant consumption of post-apocalyptic movies is that I end up buying all sorts of crazy survivalist books. So far I've bought books on how to forage wild mushrooms, how to butcher any animal, how to tan animal hides, etc. The downside of this is that I now have far too many books to pack quickly when I need to escape the pending robot zombie invasion. What I really need is just one book to help me live through the coming years of burning chaos. Well, thankfully Amazon recently recommended "How to Survive the End of the World as We Know It: Tactics, Techniques, and Technologies for Uncertain Times" to me.

Their supercomputer was probably monitoring all my purchases and finally said, "Sheesh, I'm going to save this nutjob some time".  Anyway, I ordered the book today, I'll letcha know how it reads.  It has pretty decent ratings though, so I'm expecting good things.

Woah ho ho!  Drunken Goon must be moving up in the world.  Either that or someone didn't really read my blog too closely and maybe decided I was a "real" reviewer.

See, I got sent an Advance Readers' Edition of Dog Blood by David Moody in the hopes that I'd review it.  For some reason, though, this made me instantly not want to read the book.  Not because I didn't think it was going to be good, but because it now became "something I needed to do".  I think that's just something weird in my brain though.  As soon as I schedule anything I almost instantly don't want to do it.  Hell, it could be a trip to the naked lady brewery but as soon as I put it on my calendar, I start to dread it.

But, I found myself traveling a lot in May and June so I had lots of time for reading.  I sucked it up and dove into Dog Blood.  Turns out it is a sequel to a book called Hater.  It was easy enough to pick up the story in the middle, though.  I realized a few things as soon as I started reading this book:

Realization #2 didn't happen right away, though.  It seems like the first chapter is set up in a way to make you think this is going to read like a screen play for your standard zombie movie.  Then the book shifts a little bit and you realize that the chapters alternate between the normal human's perspective and the "zombies" perspective.

Yup, that's right, the zombies are smart.  In fact, it isn't really fair to call them zombies.  The book calls them haters and the premise is that "something" happened to randomly change normal people into haters.  Haters are pretty much like you and me, except they can't resist the urge to kill non-haters.  They can also sense the difference between haters and non-haters (something that normal human's can't do).  I guess, imagine smart rage zombies and you are halfway there.

I really want to read the first book, Hater, to get more background on the actual change process and what happened during those first few weeks/months.  Many of the haters suddenly found themselves attacking/killing their own families.  Children killing parents, etc.

Anyway, back to Dog Blood.  It was a lot of fun to read and it definitely kept my interest.  I think I stayed up late two nights and polished her off.  My one bitch is that I didn't really dig the ending.  It seems like Moody is setting the stage for a series of these books and I don't know if that's such a great idea.  It was sort of like Back to the Future 2 when it ends and you know that there has to be a sequel.  This had the same feel.  Almost like the pilot episode of the TV series.  Regardless, I'm still going to go back and read Hater and I'll probably read whatever the next installment is.  We'll have to see how far I take it after that.

P.S. I was just peaking at the back cover of Dog Blood and there is some high praise from Guillermo Del Toro for Hater.  So, maybe we can expect a movie soon?

Until 10 minutes ago, I knew nothing of this book. Now, all I know is that I can't spend my $4 fast enough. From the description it looks to be a sort of tongue-in-cheek version of Left Behind or something. I like the sound of that.

After watching Victorian Farm for the past few nights (note: I'm addicted), I'd been searching Amazon for practical homesteading, survival and farming books. It was pretty much by accident that I stumbled onto the Pocket Guide to the Apocalypse. Sure, I was looking for practical guides to survival and whatnot, but, all work and no play makes Homer something something... so it seems like I'd be remiss if I didn't get something fun to read and joke around with when the end days come and I'm up to my neck in goats and chickens and manual labor.

Well, the same day that I posted, The Road by Cormac McCarthy, I finished the book.  I stayed up till 2am because I couldn't stop reading.  Also, it too me a little longer than it normally would have because I kept having to get up to check on my two sons.  Not because they were restless but because the relationship between the father and the son, in The Road,  got to me that much.  This book might be one of the most realistic portrayals of the apocalypse that has even been written (or filmed, for that matter).  And, that realism hurts.  The tension and foreboding never let up and I found myself having to pause and take a breath.

I won't give anything away (surprise, surprise, I used to be the spoiler king!), but if you have children, expect The Road to really get to you.   Next thing you know, you'll be building bomb shelters and protective force fields in your backyard.  Just because you will never want to have your children to have to go through any of that nightmare.

Ugh.  So, now I need some post-apocalyptic, but somehow more light-hearted.  I did a brief look around and found Wastelands: Stories of the Apocalypse.  Has anyone read this collection? 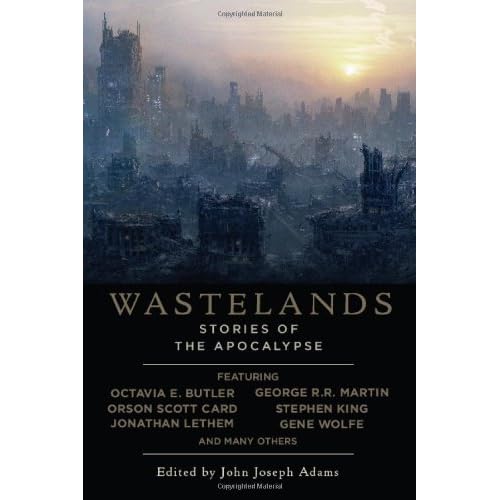 Ok.  So, I realize that in my post Oryx and Crake (maybe I should start reading?) I somewhat promised to start on Oryx and Crake as my next book (hopefully becoming a string on post-apocalyptic books to be consumed by yours truly).  Well, here's what happened.  I've been traveling for a few days (nothing fun, just stupid work) and I was without a book the entire time.  So, when I got home on Saturday, I devoured the rest of Blue Mars and suddently found myself without a book.  I read just about every night and whenever I can throughout the day, so to be without a book is something I couldn't tolerate, especially because I'd spent 3 days traveling in just such a predicament.

Well, Oryx and Crake was going to have to wait (because I haven't gotten it yet) but I didn't want to let down my post-apocalyptic buddies by starting another Hugo-award-winning sci-fi book.  Then I found a copy of "The Road" by Cormac McCarthy that someone must have given to me as a gift.  I've been pretty excited to see this film ever since I first got a glimpse of the trailer.

So, I picked up my copy and hopped in the bath.  An hour later I was shivering in barely lukewarm water and I didn't want to go anywhere.  So far, I love The Road.  As you know, I'm a drunken goofball who loves shoddy movies, but I do appreciate a well-written book.  McCarthy's style is reminiscent of Hemingway, if you ask me.  It's very terse and it moves along very quickly.  However, when he does go into some narrative detail, he does so very well.  (describing a creature's eyes as "as blindless as spider's eggs" is a good example)

Anyway, has anyone seen the movie yet?  How does it compare?  I don't mind if it can't capture the book (people need to quit bitching about that, it's virtually impossible anyway).  But, does it stand up on its own?

So, when I originally created this site back in '96, the running gag was that I was this barely-literate drunken goon.  Well, two out of three ain't bad, right?  Turns out, I can read.  Although, truth be told, several years ago I decided to only read books that had won the Hugo or Nebula.  But, of course, each of these books would send me on a side journey to read all the works of each of these authors.  In some cases that took me something like a year just to read the author's collected works (Thanks a bunch Ursula K. Le Guin).  Well, it sure seems like I should be reading some post-apocalyptic books, right?  I mean, I know the site isn't called postapocalypticbookmania.com but we can still randomly talk about books, right?

From the synopsis and reviews, the apocalypse sounds like it was by plague (which I think is the most likely kind we'll get these days).  The book follows the life of Jimmy (aka Snowman) before and after the apocalypse and it sounds like there are some pretty creepy moments.  Something about green-eyed "Children of Crake" and whatnot.  Anyway, can anyone recommend this book?  Because I'm just about done with "Blue Mars" and I need something new.

So, let me see if I have this right.  It's a choose-your-own-adventure book about the zombie apocalypse and you are (in your role as the protagonist) a pink stuffed bunny rabbit?  That's correct? Awesome!

From the description over at Amazon:

You're a stuffed bunny, and it's the end of the world. Between you and your objective are forty or fifty ­zombies gorging ­themselves on the flesh of the living. If you disguise yourself as one of them and try to sneak past the feeding frenzy, turn to page 183.If you grab a tire iron, flip out and get medieval on their undead asses, turn to page 11. Zombocalypse Now is a comedy/horror ­reimagining of the choose-your-own-ending books you grew up with. You'll be confronted with undead hordes, ­internet ­dating, improper police procedure, and the very real ­danger that you'll lose your grip on reality and wind up stark raving mad. The zombie apocalypse has never been this much fun.