Ok. So it’s a little weird for me to add this one, but I feel like I need to. This is a guest review from the old site. I think it was submitted around 1997 or so. The reviewer is Steve Paul who was a xerox zine publisher, wicked skateboarder, rabid Nirvana fan and all around great friend. Some years later he was killed in a freak accident and just reading this review brought all of that back. But, I guess it’s best to remember his hilarious and sarcastic nature and this review sure does celebrate that. 😉

So what can I really say about the movie, “Teenage Caveman” that we haven’t really thought a million times while watching a movie with a clever idea that somewhere in the making stages went completely wrong?
The entire thing’s about this young buck in a caveman-style mini-skirt that is going through adolescence in a Neanderthal society, but the entire story takes place after the nuclear holocaust. The general theme is that after the world blew up, the few people in society fell back into a zero technology culture and we all had to start over from scratch again. Kinda a bummer of a future if you think about it, but then you throw in the rebel against the system, “We don’t need no thought control, man!” theme, and what you end up with is one gigantic mess.
Teenage Caveman mainly consists of four or five dialogs that are repeated so often throughout the course of the movie that you want to poke No. 2 pencils in your ears to stop the insanity. (Editor’s note: “The word is the law. The law is the word. The good is the blah. Blah dee dee blah.”) Plus there are lots of neat monsters with really pathetic costumes, and eventually you begin to ask yourself, “Does prolonged exposure to nuclear radiation really lead to a mutated society full of Cro-Magnon beatniks, 60 year old Jimmy Stewarts, and rubber Godzilla wannabes?” Something to think about before you go vote this fall. Stick it to the man and tell him, “We don’t want your rules and we certainly don’t want your goddamn war!” 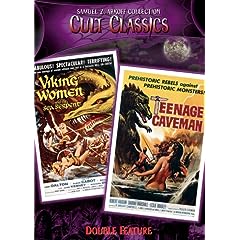